Not the best-quality recording, but what the fuck; still pretty damn cool.

Well, in a lucky capper to Jack Kirby's birthday week, I found a copy of Kirby: King of Comics, by Mark Evanier, at my local Barnes and Noble for about 75% off.

It doesn't appear to be in stock on the B&N website, but check your local store; maybe you'll get lucky too.

Sure is purty. It'll look great next to my copy of The Art of Ditko.

Because there's no other way to close out my Zappa/Republican Convention theme week.

You know, I seriously considered just calling this post "Busiek and Mignola's Final Fantasy" and then opening with a "Before you get excited..." but ultimately decided that would have just been mean. (As it is, it's already misleading to say "Busiek and Mignola", as Mignola was just doing the covers.)

Can't remember what made me think of it -- maybe it was when I was going through my searches and saw a bunch for both busiek and final fantasy -- but I recalled that Busiek had alluded to a cancelled Final Fantasy project. Now, Kurt's been damned active over on FormSpring, so I figured I'd ask him about it -- but then I figured hey, maybe I should actually do some research first.

Didn't find much, but there was a bit of discussion about it in a CBR thread called Series that Never Saw the Light of Day -- which is also where I first heard Mignola was the cover artist, and Dell Barras (who I'm not familiar with) did the interiors.

Busiek showed up in the thread and explained a bit about the series and what happened to it: it was for Hollywood Comics, a Disney imprint that "either never got launched or was killed off almost right away".

Most interestingly, he gave a short explanation as to when this was and which Final Fantasy(s) he was adapting:

This was so long ago that when I was first assigned the project, I did a story outline, and the people at Squaresoft liked it a lot, but said, "Uh, well, this is good, but we're about to do a new version of the game, can you revise it to be about FINAL FANTASY 2 instead?"

But yes, it was based on FINAL FANTASY 2, though Dell Barras's interpretation of the Japanese designs maintained basic designs but spun it into a very, very mainstream-American style.

That'd be the American FF2, of course, AKA FF4. I'm sure it would have been fun -- and featured better dialogue than the original SNES translation of the game.

Anyhow, after finding out those tidbits, I decided to ask Kurt this:

How far along was the Final Fantasy adaptation (or adaptations, since you had to switch games partway through) before being scrapped?

The first version was a detailed outline. The second was a complete script for all four issues, I think, plus lettered art for at least one and penciled art for one more. Four nice Mignola covers, too.

Wonder where all that stuff went and whether anybody has it now. All I've seen is this ad, in the above-linked CBR thread (and presumably from the FF1 period): 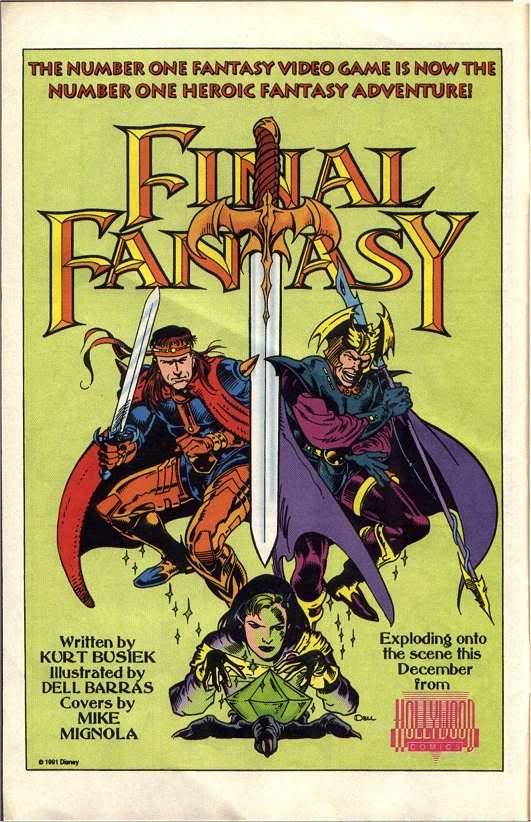 I haven't been able to find anything else, even any of the Mignola covers, which is a pity -- but hell, one more thing to add to my "things so obscure you can't find them on the Internet" list. (Course, if anybody can prove me wrong, do feel free to shoot me a link...) 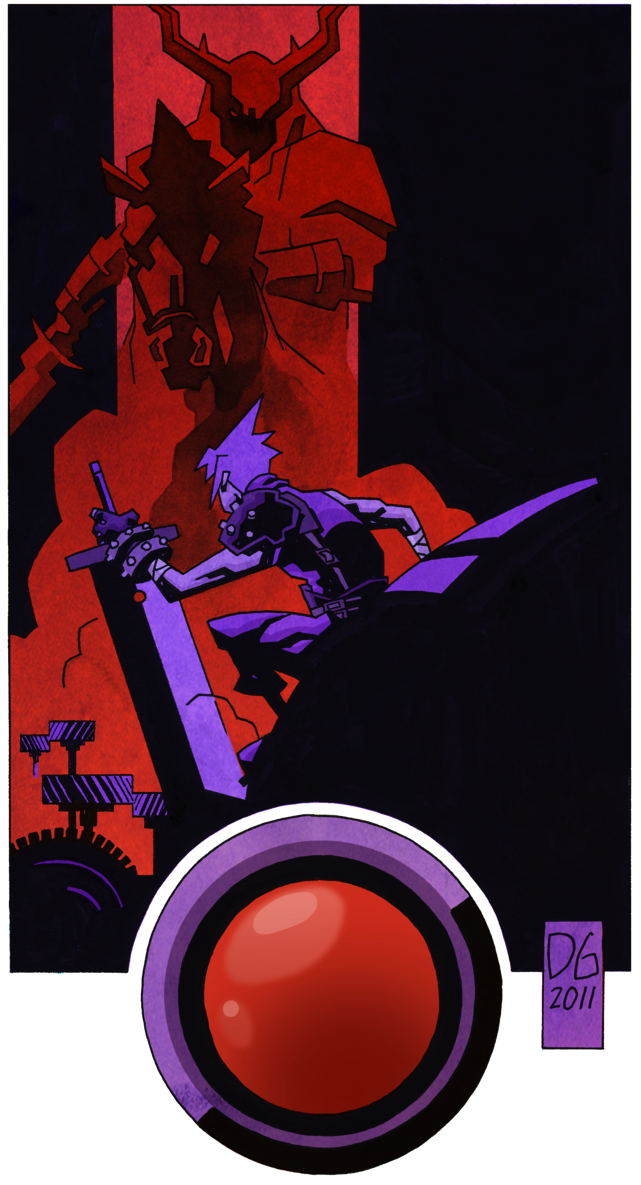 More of Frank explaining precisely how he feels about televangelists -- this time in the form of a Beatles medley!

It's interesting to notice just how much Zappa's turns of phrase have crept into my own lexicon. I'm fairly confident I use the phrase "ignorant cracker" far more than the average person.

Playing: Oh God, you'd think I have ADD or something. Recently I have played Crackdown, Last Story, Xenoblade, Sonic 2 Delta, and Mottzilla's patch for BS Zelda. One of these days I'll probably even share some thoughts on each of them.

I'll be honest: I can't tell if The New Music is the name of the show he's on, or just a title the uploader gave this video. But anyway, here's Zappa in a limo talking about his projects, some social views, and, in keeping with the Republican Convention theme, a general disdain for Reagan (though he doesn't have any kind words for Mondale either). 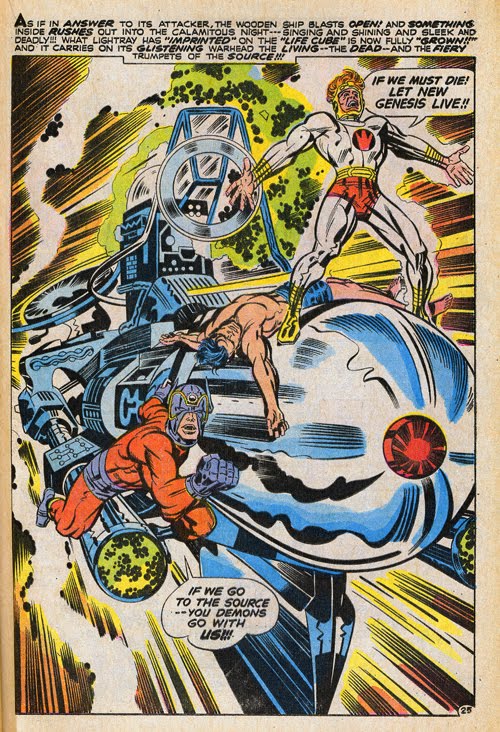 Scan found at Glass Walking-Stick in a Google Image Search

Today would have been Jack Kirby's 95th birthday.

And according to Mark Evanier's afterword to Jack Kirby's Fourth World Omnibus, Volume 2 (now in paperback!), he drew that page up top in an hour.

Speaking of Evanier, he posted a remembrance today, along with Steve Bissette and countless others. Heidi MacDonald has a great selection of Jack's art, plus a photo of Alan Moore towering over him.

But most importantly of all:

Jack's granddaughter Jillian has started a campaign called Kirby4Heroes, a fundraiser for the Hero Intiative. I've spoken of the Hero Initiative before, but to review: it's a charity that helps support comic book creators who are down on their luck. Unfortunately, there are quite a lot of those; here are some testimonials (including some from folks who are, sadly, no longer with us):

Kirby's legacy is not only as an artist, storyteller, innovator, and Man with Big Ideas -- he worked hard to make sure his fellow creators could make a decent living. Because in the old days many of them didn't -- and, sadly, today many still don't.

A couple months back I mentioned I'd been re-watching X-Files on Netflix.

Well, appears I'm not the only one. Via io9, I've just been introduced to Monster of the Week, a weekly webcomic working through the series one episode at a time.

And there's plenty to make fun of -- I've certainly found that the unevenness I remember from the later episodes were actually there right from the beginning. Last night I watched yet another episode that had a strong setup and blew it in the last act. So, Monster of the Week -- to share my enthusiasm and my frustration.

In honor of the Republican National Convention, Zappa's thoughts on the religious right:

And yeah, he had plenty to say about Democrats too -- but their convention's next week.