When it's on the damn cover. 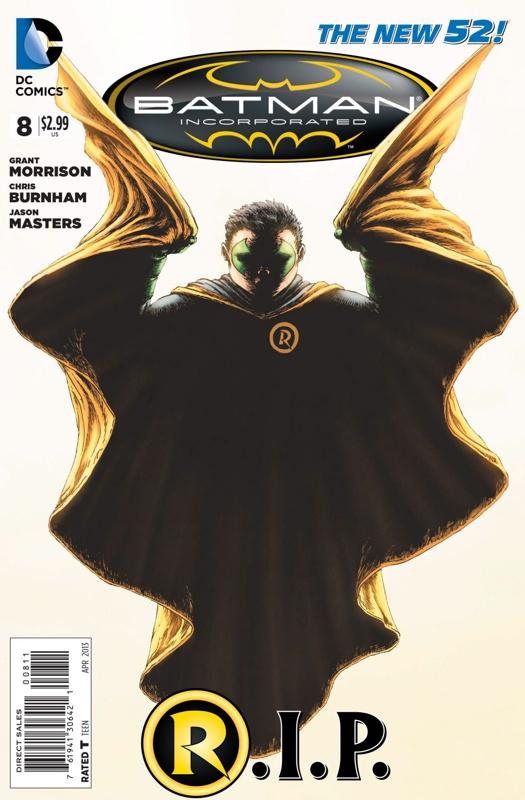 "Spoilers" follow. If, you know, you looked at that cover and found yourself scratching your head wondering what could possibly happen in this comic.

As I may have mentioned once or twice last week, I've been laid-up with a cold. I wasn't up to leaving the house for comics last Wednesday. I knew there was some big "One of these characters will die!" thing going on in Batman Inc #8, that comics sites like Bleeding Cool were filling their headlines full of spoiler warnings, and that non-comics media outlets like the New York Post were blithely covering it with no such concern for spoiler warnings.

And then, on Thursday, one day after the issue hit, I ran across a headline on Robot 6 that spelled it out. I was pretty pissed-off at the breach of etiquette.

Up until I finally made it into the comic shop yesterday and actually saw the issue in question.

At which point I realized that yes, all this spoiler-warning nonsense really was nonsense. It's not a spoiler if it's on the damn cover.

The issue itself wasn't bad. Had some good moments; I particularly like Damian telling Dick he was his favorite partner.

The ending -- well, there are some fantastic reaction shots of both Batman and Talia, but ultimately the whole thing actually felt a little anticlimactic considering how much it'd been built up.

Plus, it's comics. Odds he'll actually stay dead? There is a comic book called Batman and Robin. To the best of my knowledge, it is not being cancelled. I suppose they could make Tim Robin again, or there could be some other Robin, but...well, I'm pretty sure Damian's going to get better. Lazarus Pits may be involved.

(There's also the point that the cover is based on one from the Batman: RIP arc a few years back. Batman, of course, also did not actually die. And "RIP" turned out to stand for "Rot in Purgatory". Which, I guess to be fair, is an apt way to describe all the benched DC characters.)