I observed, last month, that while I think Scott Snyder is an immensely talented writer and really gets Batman, his two major arcs up to this point really haven't been for me.

I decided to give him one more shot, that #18 would be make-or-break for me.

Well, the good news is, #18 really is pretty great. It brings back Harper Row, the main character from issue #7, my single favorite issue of the new series. #18 isn't quite as good as that one (among other things it lacks Becky Cloonan -- though Alex Maleev's work is fantastic and obviously Andy Kubert is no slouch), but it's a good solid continuation of Harper's story, and gives us a good street-level view of Batman freaking the fuck out following Damian's death.

There's fan speculation at this point that Harper is going to become the new Robin. That would certainly fit what happens in this story, and I wouldn't mind it -- but I'd much rather she stay Just a Regular Person. I've said before, often, that my favorite superhero stories are the man-on-the-street ones -- Ditko's Just a Guy Named Joe, Harmon and Jones's To Serve and Protect, Busiek and Ross's Marvels, Busiek and Anderson (and Ross)'s Astro City. I love supporting characters in the Bat-verse like Leslie Tompkins, or the guy who fixes up the Batmobile, or the lady who builds the supervillains' lairs. I would love for Harper to stay another one of those -- an ordinary person leading a relatively ordinary life that occasionally and extraordinarily intersects with Batman's. That, for me, is her ideal role.

But if she becomes Robin, I'd be down with that too.

(Course, I also won't rule out Damian coming back. This is comics. And it's not like Morrison's never done the "bring everybody back to life in his last issue" trick before.)

But now for the bad news:

If Batman #18 was the book that convinced me to stick with the Snyder/Capullo run, the news that #21-#31 are going to retell the origin story is probably going to convince me not to. 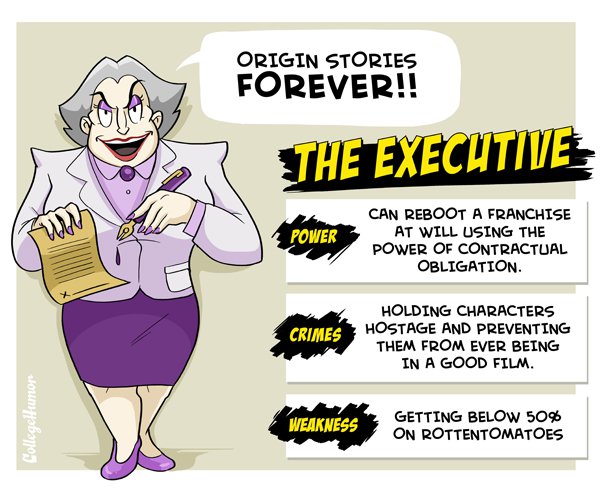 Image via CollegeHumor.
This fucking thing was on the inside cover of every DC comic a few months ago.
Apparently without any intention of irony.

Look. I love Batman. And I love his origin story. It's a classic bit of comics history, it's one of the key elements to his story, and it's one of the reasons he's endured as an American icon for lo these 74 years.

But enough is e-goddamn-nough. Give it a rest. Tell some new stories.

Finger, Kane, and Moldoff told Batman's origin in a page and a half. There is no good damn reason to stretch it out to eleven issues at four bucks a pop.

I'm sick of the fucking relaunches, rehashes, reboots, retcons, repetition, and various other words beginning with "re".

I'm the biggest damn Batman fan I know. And I'm sick of this crap.

I'll probably read #19 and #20. And I'll probably stick with Inc as long as Morrison's writing, and maybe Detective as long as Layman's writing. But there's every chance I'll be a non-Batman reader before the year is out.

Also, I think I'm done with Animal Man. I finished the latest issue, did some reflecting, realized I genuinely did not give a fuck about anything that had happened in this issue or any issue since Travel Foreman left the series, shrugged, and decided that's another three bucks a month I could stand to spend on something else instead. Like air conditioning. It's supposed to be 94 degrees today. It is the middle of March.

This is really a pity, as Animal Man was absolutely the best comic out of the New 52. But that Rotworld shit went on way past its shelf life.

And here we hit the central problem, I think, with comics marketing for the past couple of decades: things like crossovers and reboots do sell -- but their popularity is unsustainable. Today's sales through cheap gimmicks come at the expense of tomorrow's sales through loyalty, goodwill, and repeat business.

The good news is, there's so much great shit out there right now from publishers who aren't DC or Marvel.