I had a meeting today for a local business that some clients of mine are working on opening.

It involves ziplines, and there was a demonstration of zipline technology.

One of the components -- a proprietary piece that helps keep carabiners shut -- is called a tweezil -- I'm not sure if I've got the spelling right, but that's how the guy pronounced it, anyway.

And he confirmed that yes in fact it is named after Dweezil Zappa, as a tribute, because its inventor is a huge Frank Zappa fan and vowed that his first great invention would bear that name.

(Can't find any documentation of this offhand online, so if anybody can lead me to more information I'd be happy to link it. But that's what the man said, anyway.)

Yesterday I went to a Cory Doctorow book signing at Changing Hands.

He was promoting his new book, Homeland, but the talk he gave was more general. It dealt with his usual pet issues: overbearing copyright law and its impact on ordinary citizens, and spyware that attempts to control our computers and how it makes them and us less safe. A lot of it was about Aaron Swartz, the talented programmer who developed RSS, helped build Reddit up, spent the last several years of his life fighting charges from the US Attorney threatening a decades-long prison sentence for copyright infringement (when the copyright holders themselves chose not to press charges), and took his own life last month. It's a sobering story -- obviously depression is a complicated thing and it's foolish to blame a person's suicide on one single cause, but I think any reasonable person can conclude that (1) the charges against him contributed to his decision and (2) they were wildly disproportionate to his alleged crime.

Sobering stuff, but a good talk and mostly light despite ending on a heavy note. Nobody in the audience recorded it, but Doctorow said the talk's been recorded elsewhere and that he'd provide a link once it was uploaded to YouTube. (Edit 2013-02-13: Per Doctorow's blog, the version of the speech he gave the next day at ASU has been posted on ustream: part 1, part 2.)

Before all that, I was sitting in the audience waiting for him to come out onstage. I was reading a copy of Circle of Enemies; the lady sitting next to me asked if it was an urban fantasy novel and when I said that it was, she handed me her business card and said that she was an urban fantasy author as well. Her name is Kater Cheek, she's a former student of Doctorow's, and the urban fantasy novel advertised on her card is Seeing Things. I bought a copy when I got home; haven't had a chance to read it yet, but I'm looking forward to it.

I mentioned that I'd recently put out a few audiobooks; she hadn't heard of ACX so I suggested she give it a look if she's interested in producing any of her own.

I talked to Doctorow a bit about audiobooks, too, when it came time for the actual booksigning. The guy in front of me asked if Homeland would be released as an audiobook; Cory said there were no plans at present, because he won't distribute through Audible until they offer a DRM-free option, and Audible is 90% of the market. He said he's looking at options with the Humble Bundle; when I got up there I wished him luck on that, and added that a Humble Audiobook Bundle could be a great help to narrators like myself who don't really have an alternative to Amazon but don't like DRM very damn much either. (I mentioned that, while I sell books on Audible, I can't be their customer, because they don't support my operating system. Crazy.)

Anyway, I asked him to sign my Nexus 7 case, because that's where I keep most of his books. 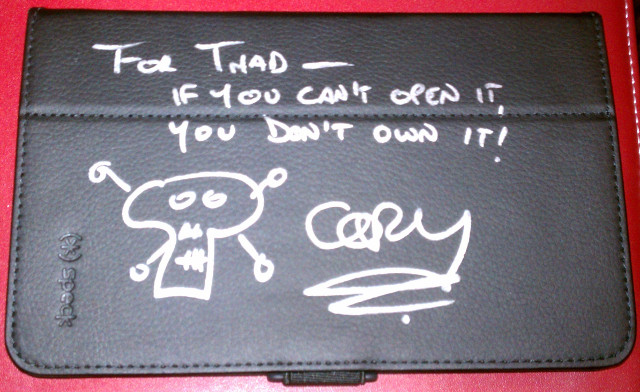 Which is really a twofer, because now my case has not only a drawing of a skull and crossbones by Cory Doctorow... 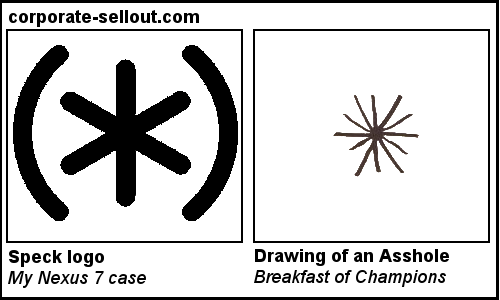 ...it's also got a drawing of an asshole by Kurt Vonnegut.

(For the record, I haven't opened it but I'm pretty confident that I can. It looks easier than my Mac Mini, Wii, or old 60GB iPod, and I've opened them.)