I have more things to say about Spider-Man for the PS4!

I saw an ad the other day for a comic book adaptation of the game. It had a logo that said "Marvel Gamerverse".

Now, I assume this is just an umbrella label that Marvel is going to stick all its game-related comics under, and doesn't actually imply that there are going to be other games that take place in the same universe as Spider-Man (aside from the inevitable sequel, of course).

But it got me thinking: what's Spider-Man 2 going to look like, and what would it look like if there were other, non-Spider-Man games in the same series?

My first question is, what's Spider-Man 2's map going to look like? The best thing about the first game is swinging around a fairly realistic version of Manhattan. It's not perfect, of course, and it gets less accurate the farther you get from midtown, but as somebody who's only been to New York once I was impressed by the verisimilitude. "Oh, that's Radio City Music Hall; that means Rockefeller Center is over this way."

How to expand on that? Should Spider-Man 2 include some of the outer boroughs? I'm not sure there's quite as much demand for swinging around Brooklyn and Queens, but I could dig it.

Otherwise, or in addition, they could also expand Manhattan, work on making it even more accurate than it already is. I suppose there'd be some cognitive dissonance there -- wait, this is supposed to be the same location as the first game; why is the map so different? -- but, ultimately, it's video games and you suspend your disbelief.

Alternately, the new game could take a cue from the upcoming Spider-Man: Far from Home and put Spidey down in some other city. But given the dangling plot threads left at the end of the previous game, I don't expect that to happen; I expect the sequel will still be based in New York.

Another thought I had: what other superheroes would function in a game like this?

The most obvious answer is Daredevil. He's another street-level Marvel superhero who gets around by leaping across rooftops. He'd be a natural fit, and the game could also find a way to work some compelling courtroom drama into the out-of-costume sequences. Plus, some creative design choices could do some really cool shit with DD's heightened senses. (One of the most memorable moments in Spider-Man was when I heard a voice over my shoulder and it startled me. You wouldn't be able to make a Daredevil game that required the player to have a surround sound system or play the game with headphones, but you could certainly design the sound so that it would benefit from those things, where available.)

But you know who I'd really like to see in a Spider-Man-esque game? Black Panther.

BP is another character with a relatively modest super-power set, who can run up buildings and leap across rooftops. He'd be perfect. And as cool as Manhattan is in Spider-Man, a game set in Wakanda would provide an opportunity for more creative city design. Where Spider-Man benefits from a realistic recreation of a real-life city (with some Marvel Comics embellishments like Avengers Tower and the Sanctum Sanctorum), game designers would have the freedom to design Birnin Zana however they want (much like Gotham City in the Arkham games). Picture a Golden City as big and detailed as Spider-Man's Manhattan -- yeah, that's a game I want to play.

Today's the anniversary of a couple of things.

It would have been Jack Kirby's 96th birthday.

And, more importantly -- as the King himself would surely have acknowledged --, it's the fiftieth anniversary of the March on Washington.

I was at a loss for precisely how I was going to tie these two events together in the same post -- and then I remembered Congressman John Lewis has a comic book out.

Stephen Colbert interviewed him a couple of weeks back:

Lewis discusses not only his new comic trilogy, March, but a comic that inspired him in 1957: Martin Luther King and the Montgomery Story. An excellent summary by Andrew Aydin at Creative Loafing Atlanta says:

Richard Deats, [the Fellowship of Reconciliation]'s Director of Communications in the 1990s, laid out FOR's motivation and purpose behind the comic in a 1997 letter, saying, "The comic book was originally intended to convey to semiliterate persons the story of nonviolence and its effectiveness as seen in the Montgomery movement. The medium of the highly popular comic book was believed to be the best way to reach masses of exploited African-Americans."

And that's what comic books were: they were a way of reaching the masses. They were literature for the illiterate.

And as with all mass-media means of distributing information to the poor, this upset the elites.

When comics first appeared in American newspapers around the turn of the twentieth century, they were seen as gutter trash. In the decades that followed, they were scapegoated for society's ills, culminating in Senate hearings, the Comics Code Authority, and the devastation of an entire American art form.

In a way, Martin Luther King and the Montgomery Story was exactly what the elites feared: it upset the social structure. It gave teenagers like John Lewis ideas.

It's ironic that the comics medium's greatest foe, Fredric Wertham, was also an ardent progressive in the Civil Rights Movement -- if he had never written Seduction of the Innocent, he would instead be best remembered for the doll study used in Brown v Board. Wertham was right, in a way, about comics' potential as a disruptive force, as a powerful tool for influencing young people -- but he chose to fear the imagined impact of fictional crime and horror stories, rather than see the true potential of comics as a force for good, for education, for organization, for social justice.

Kirby, of course, saw boundless potential in comics, in a way few people ever have. He used comics to advocate for social change, too, though he preferred fiction and metaphor, and is best remembered as a superhero artist (though his work crossed all genres and invented some). He saw superheroes as modern mythological figures -- as New Gods -- as aspirational avatars.

In the 1940's, Kirby co-created Captain America, advocating for US intervention in WWII when that was still a controversial position. In the 1970's, his Forever People were technologically-advanced, alien hippies. In the 1960's, The Fantastic Four gave us The Hate-Monger, a supervillain in a Klan hood who turned out to be Adolf Hitler himself. It also gave us this guy: 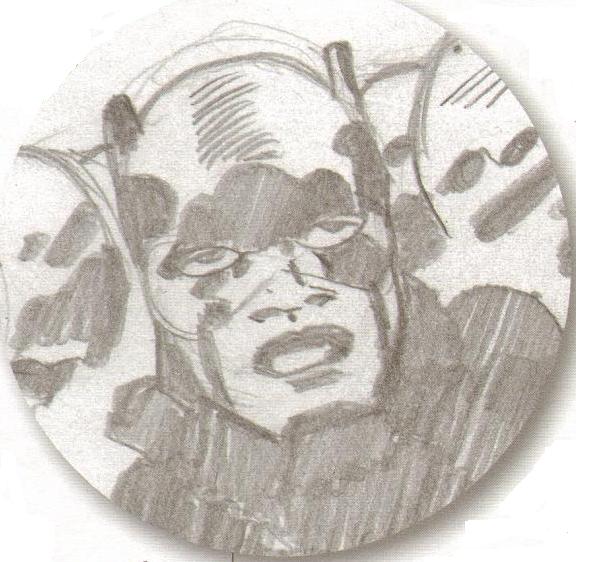 That image is courtesy of Brian Cronin's Comic Book Legends Revealed, which notes that the Black Panther didn't look like that in the final published comic -- his half-mask was replaced with a full mask, making it less immediately obvious that the Black Panther was, in fact, a black man -- indeed, possibly the first black superhero. (Inevitably when you refer to a comic book character as "the first" of anything, that's going to lead to debate -- sometimes that debate can miss the point entirely and turn into mere nitpicking over comic book trivia, though other times, as in Who Was the First Black Superhero? by JV Halliburton II, it can explore the richness of comic history and highlight all the important characters who have helped to build and shape it and make it more diverse.)

Today Mark Evanier wrote a lovely remembrance of his friend and mentor, and among many other things he had this to say:

Jack was all about something new, something exciting and something that took whatever he was doing to the next level. [...] Jack was first and foremost interested in producing something that would take comics to some new plateau, creating new opportunities and new possibilities.

Kirby believed in comics. So did Martin Luther King and Alfred Hassler. So does John Lewis.

And so does Jillian Kirby. I've written before about her Kirby4Heroes fundraiser for the Hero Initiative, a charity that helps struggling comic creators. As we celebrate her grandfather's birthday, don't forget about the less fortunate who have helped shape the comics medium over the years and decades.