Yeah, I haven't exactly been keeping up my post-a-day habit.

I've been busy -- yes, busier than when I was planning my wedding -- and, well, it's been that kind of month. If I were to pick a single photo to sum up the kind of month I have been having, it would be this one: 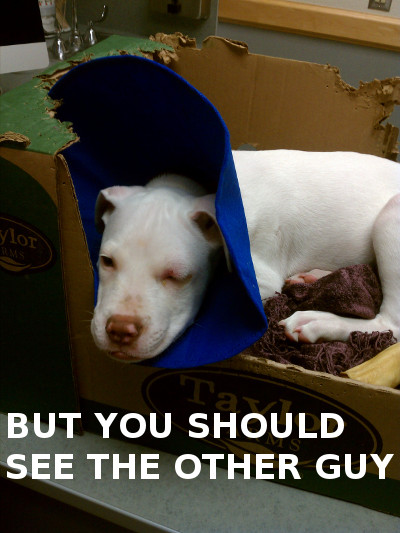 So I've been busy. And I've also been a little wary of divulging too much about certain comings and goings and details of my life since last month's burglary. I don't think it's likely that the thieves are monitoring my blog, but it's not impossible.

Anyhow, I'm okay. It's been a tough month, but I'm hanging in there.

I turn 31 in a couple days. I admit that the future of this site isn't the biggest thing I'm considering, but it's on my mind.

Don't know if I'll get back to posting daily. But I liked doing it.

Don't know if I'll get back to daily Zappa posts, either -- I liked doing that, too, and I'm confident I could continue to do it for a long damn time, even if I continued to try not to use the same song twice -- but the bastard about looking for things on YouTube is you tend to find the same dozen or so videos repeated over and over again, with stuff you haven't seen buried somewhere around page 30. It kept taking me longer and longer to find something I hadn't posted before.

The site's probably due for a fresh coat of paint, too. I've spent enough hours of my day job fucking around with CSS that I've actually managed to develop an appreciation for rounded rectangles and box shadows. (But not gradients. Never gradients.) Of course, if I were to sell out my minimalist, oldschool street-cred with such eyecandy, I could make some back by getting rid of the red links and going with good old-fashioned blue. Possibly even straight-up #0000FF.

Or not. I'm hoping October's a better month, but so far it's not showing any indication of being less busy.